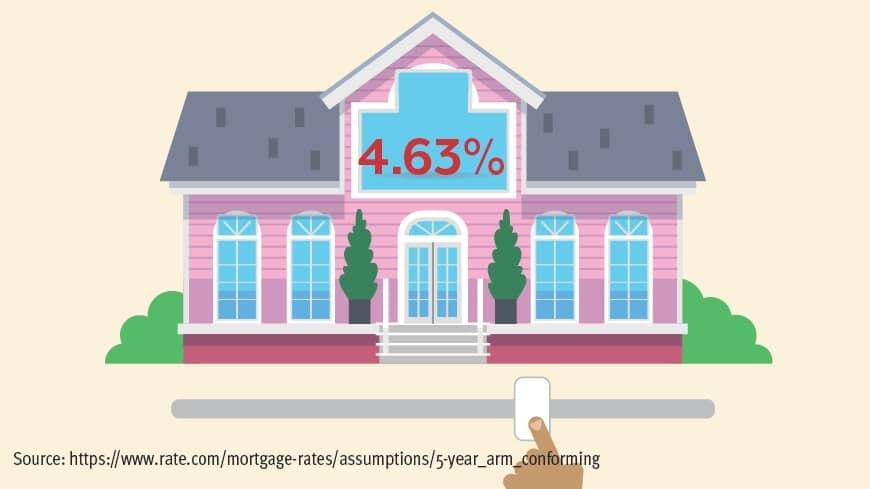 Here’s some good news for anyone who’s been worried about the cost of buying a home right now: the twin pressures that have been pushing up housing affordability over the last few months have started to ease up.

The dual effects of rising mortgage rates and increases in home values have stymied many potential homebuyers since the winter of 2022. Housing supply has started to improve, though very sluggishly. And borrowers are starting to rediscover a strategy to secure a lower interest rate at the start of their loan—the adjustable rate mortgage, often called an ARM.

The name may sound familiar to you because ARMs were popular loans in the early to mid-2000s. They lost popularity after the recession of 2008 and were barely used over the last 24 months when rates were low. But now ARMs are back, and stronger than ever. Let’s explore why they are being embraced by borrowers now.

(Warning: we’ve tried to avoid arm-based puns as much as we could, but weren’t always successful. Apologies in advance.)

Wrapping our heads around ARMs

Many first-time homebuyers are drawn to ARMs because the introductory rates that are comparatively lower than those of traditional fixed-rate mortgages. This helps them reduce their monthly payments and makes becoming a homeowner cheaper.

An adjustable rate mortgage, or ARM, is a mortgage that consists of two distinct elements:

An initial fixed rate period (typically 5-, 7- or 10-year options) that features a low introductory rate, and a variable rate period for the remainder of the loan that is based on an index rate, which measures the cost of short-term borrowing.

What do the numbers mean?

If you’re new to ARMs, you may be confused by the way ARM terms and years are displayed. You’ll often see two numbers, separated by a “/”. The first number represents the length, in years, of the initial, fixed rate period. The second number represents how often the rate will be potentially adjusted after the initial period is over.

Today, most ARM options can be divided into three loan term categories:

The 5-year ARM (5/6 or 5/1) is perhaps the most popular of the ARMs. This is mostly due to the fact that the 5-year ARM offers the lowest rates for the initial fixed rate period. The rates are comparatively lower than a 7- or 10-year ARM mainly because the lender needs to provide you with incentive to absorb the risk on the other end of the loan—the adjustable portion. For a 30-year mortgage, a 5-year ARM will result in 25 years on the back end of the loan if you don’t sell your home or decide to refinance into a conventional fixed mortgage.

The 7-year ARM (7/6 or 7/1) is the middle ground between the 5- and 10-year options. Its rates are not typically quite as low as the 5-year ARM but are usually lower than the 10-year equivalent. A 7-year ARM will offer you 23 years in the adjustable rate period unless you decide to refinance or sell your home before the mortgage transitions to the variable rate period.

The 10-year ARM (10/6 or 10/1) provides the least risky option out of the three. Because the initial fixed rate period is extended to a full 10 years, the adjustable period is only 20 years long. While that’s still plenty of time for rates to fluctuate wildly and create uncertainty when it comes to monthly mortgage payments, it’s still a safer bet than the 5- or 7-year ARMs. The initial period will also feature rates that are comparatively lower than a 30-year fixed rate mortgage.

If you had to boil down the difference between an ARM and a fixed rate mortgage, the one word that would be most applicable is “risk.” ARMs are financial products vulnerable to shifts in market conditions—and no one can predict what will happen in five, seven or 10 years. So you’re taking on some risk that market conditions after that initial period could be worse than they are when you take out the loan in the first place.

However, this uncertainty can also provide potential benefits. Rates could just as conceivably drop as they could increase. Even if they stay flat or tick up a little, the built-in savings of the initial fixed rate period can result in lower overall payments than many fixed rate mortgages.

Conventional 15-year and 30-year fixed rate mortgage options carry relatively little risk, on the other hand. They provide you with steady, consistent monthly payments that do not change over the life of the loan.

Here’s a good rule of thumb to follow: When interest rates are low, lock in that low rate for the length of the loan. When rates are higher, it’s a good time to consider an ARM.

Where have they been?

Answered simply, ARMs never went anywhere. As we said, they were popular before the Great Recession of 2008-’09 as a way to start homeownership with a lower mortgage rate, and therefore lower monthly payments. Unfortunately, when the housing bubble burst, ARMs were lumped in with other loan products, like interest-only loans, as one cause of the housing crisis.

While it’s debatable how much ARMs actually undermined housing, there’s no denying they earned a bad reputation. Couple that with historically low rates from the last few years, and homebuyers weren’t even considering them. Why get a lower rate for the first few years, knowing that it will likely go up when the variable term is over, when you can lock in an extremely low rate for 30 years?

ARMs rising back up

As mortgage rates have risen back into the 5%+ range from their historic lows of the last two years, more and more homeowners are considering ARMs. One reason is to get over their FOMO from missing out on a rate they could have gotten in January 2021. While an ARM won’t give you an initial period in the 2.75% range, you may be able to find a 5/1 ARM in the 4.25% range. Simple math says that’s a lower rate, for the initial period, than the 5.25% rate of a 30-year fixed.

But rates aren’t the only reason.

Over the last decade, the guidelines for underwriting and down payments for adjustable-rate mortgages have become stricter. This follows the trends for all types of loans that have been enacted in the years following the housing market crash of 2008. ARMS are fully underwritten by the lending institution, ensuring that the borrower will most likely be able to pay back the loan.

Also, following the events that led to the Great Recession, it became clear that certain banks and bankers were able to manipulate the London Inter-bank Offered Rate (LIBOR) rate, the index used to determine rate adjustments. So the Secured Overnight Funding Rate (SOFR) was created to be a more accurate index, that will hopefully be harder for banks to manipulate.

Reasons to get an ARM

If you fit into one of the following situations, an ARM might be the right option for you.

You're young, single, and buying a starter home or condo

If the home you’re buying isn’t your forever home, or you’re open to the possibility of moving for personal or work reasons in the not-too-distant future, you could pay less each month with an ARM while you test the waters or wait for your life to settle down.

You’re planning on expanding your family

Even if it’s not in the immediate plan, if you’re hopeful that a bundle of joy will be coming your way soon, your living situation will need to change, as well. Another benefit is the possibility of paying less each month, thanks to the lower rate of an ARM, to help you keep a little extra cash on hand for after the child arrives.

You expect to have a new mortgage within 5-10 years

Maybe you expect to move due to job change, military transfer or some other reason. Maybe you plan on refinancing, either to free up cash for another purpose or because you believe rates will come down. People in these situations don’t really need a long-term solution like a 30-year fixed rate mortgage, so a 7/1 or 10/1 ARM might be a great option.

You’re getting a jumbo loan

With a bigger, pricier mortgage, the low initial rate of an ARM is especially attractive in order to free up more funds. Typically, ARMs offer the most attractive rates, but because more money is at stake, you should be extra cautious. You need to be absolutely sure you’ll be moving or refinancing before the rate adjusts, or that you’ll be able to afford a higher payment if you still have the loan after the initial adjustment period.

ARMs are still great for flexing

Whether you’re looking for a low monthly payment, or you don't plan on staying in your home for more than 5-7 years, or if flexibility is your top priority, an ARM can be more attractive to you than a 15 or 30-year fixed rate mortgage. These loans can help you make the jump to owning on your terms. You can have a place for a few years, then have the freedom to move on when life, family, work, or just lower mortgage rates come calling.