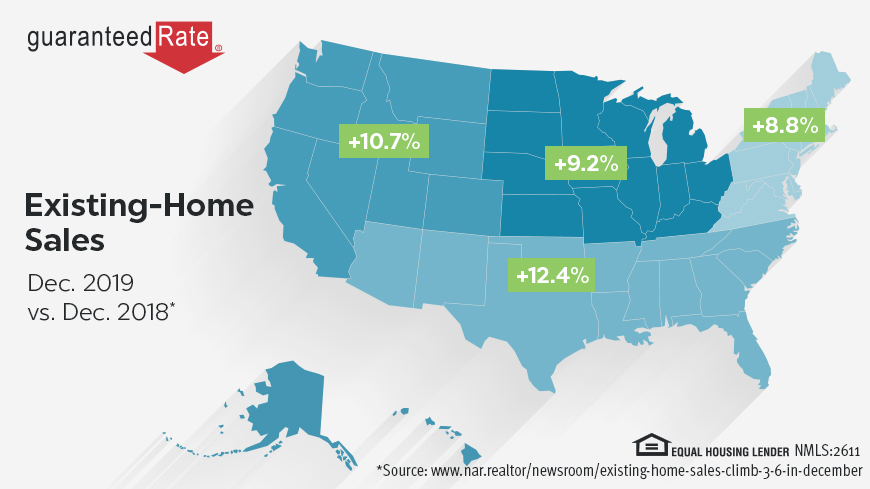 After a slight fall in November, existing-home sales grew 3.6 percent to a seasonally-adjusted annual rate of 5.54 million in December. Overall sales saw a 10.8 percent jump from last year.

A year in review

NAR’s chief economist, Lawrence Yun, weighs in on the positives and negatives of 2019’s housing sales. “I view 2019 as a neutral year for housing in terms of sales,” he says. “Home sellers are positioned well, but prospective buyers aren’t as fortunate. Low inventory remains a problem, with first-time buyers affected the most.”

The median existing-home price for all housing types in December was up 7.8 percent from last year at $274,500, with prices rising in all regions. This price increase marks the 94th straight month of year-over-year gains.

The total housing inventory at the end of December was down 14.6 percent from November, totaling 1.40 million units. With unsold inventory sitting at a 3.0-month supply, totals have dropped for the seventh consecutive month from year-ago levels.

Yun predicts home sales to pick up in 2020, citing favorable economic conditions. “We saw the year come to a close with economy churning out 2.3 million jobs, mortgage rates below 4 percent and housing starts ramp up to 1.6 million on an annual basis,” he states. “If these factors are sustained in 2020, we will see a notable pickup in home sales in 2020.”

“NAR is expecting 2020 to be a great year for housing,” says NAR President Vince Malta. “Our leadership team is hard at work to secure policies that will keep our housing market moving in the right direction, like promoting infrastructure reform, strengthening fair housing protections and ensuring mortgage capital remains available to responsible, mortgage-ready Americans.”

Year-over-year sales are up in all four regions, and compared to last month, December’s sales increased in all but one region.