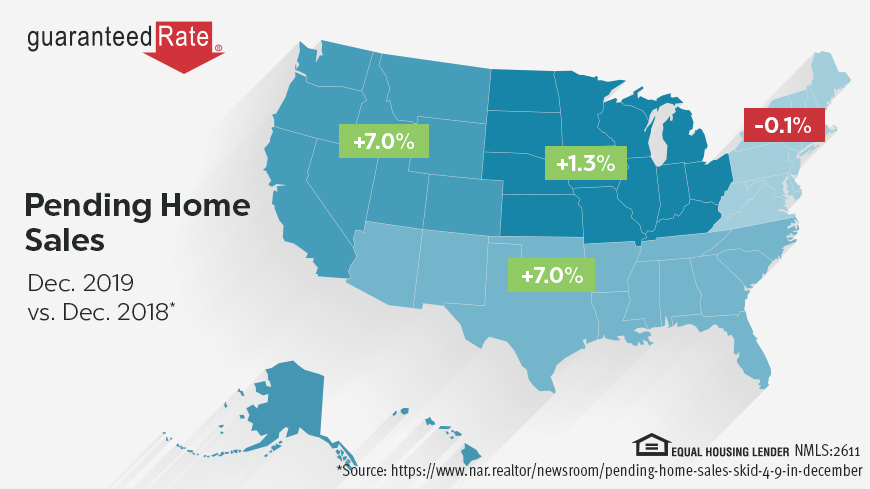 After a slight increase in November, December’s pending home sales decreased 4.9 percent to an index of 103.2, with month-over-month contract activity down across the board. Though year-over-year contract signings were up nationally—increasing by 4.6 percent.

NAR’s chief economist, Lawrence Yun, weighs in with a positive outlook on the housing market, despite his continued concern for the long-term effects of low inventory. “Mortgage rates are expected to hold under 4 percent for most of 2020, while net job creation will likely exceed two million,” he explains.

“Due to the shortage of affordable homes, home sales growth will only rise by around 3 percent,” Yun predicts. “Still, national median home price growth is in no danger of falling due to inventory shortages and will rise by 4 percent. The new home construction market also looks brighter, with housing starts and new home sales set to rise 6 percent and 10 percent, respectively.”

Yun explains the markets with more affordable price points (around $250,000) are drawing the most buyer attention, including:

“The state of housing in 2020 will depend on whether home builders bring more affordable homes to the market,” says Yun. “Home prices and even rents are increasing too rapidly, and more inventory would help correct the problem and slow price gains.”

While all regions were down in December, three out of the four were up in comparison to last year.