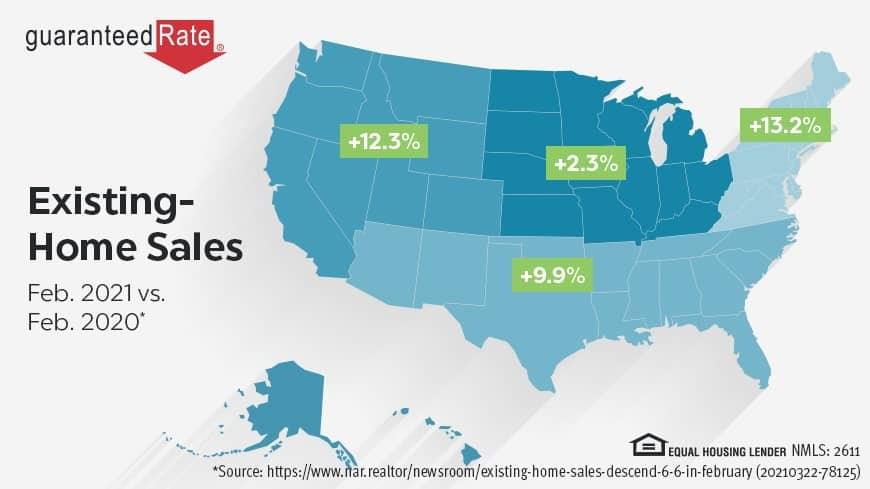 After two months of gains, February’s total existing-home sales dropped 6.6% from January to a seasonally adjusted annual rate of 6.22 million, though this is still 9.1% higher than last year.

“Despite the drop in home sales for February—which I would attribute to historically-low inventory—the market is still outperforming pre-pandemic levels,” says Lawrence Yun, the National Association of Realtors® (NAR’s) chief economist.

As higher home prices and rising mortgage rates affect home affordability, Yun notes a potential for stunted growth over the next few months, though he predicts numbers will still surpass last year’s totals.

“I still expect this year’s sales to be ahead of last year’s, and with more COVID-19 vaccinations being distributed and available to larger shares of the population, the nation is on the cusp of returning to a sense of normalcy,” says Yun. “Many Americans have been saving money and there’s a strong possibility that once the country fully reopens, those reserves will be unleashed on the economy.”

Median existing-home prices were up 15.8%, with prices rising in all four major regions, marking the 108th straight month of year-over-year gains.

“Home affordability is weakening,” says Yun. “Various stimulus packages are expected, and they will indeed help, but an increase in inventory is the best way to address surging home costs.”

At the end of February, total housing inventory was equal to January’s level, but down 29.5% from last year—hitting a record low. Properties typically remained on the market for 20 days, with 74% of homes sold in February on the market for less than a month.

While only one of the four major regions saw an increase in existing-home sales in February, all four regions reported year-over year gains.