May’s existing-home sales down 9.7 percent but NAR is hopeful for a strong rebound 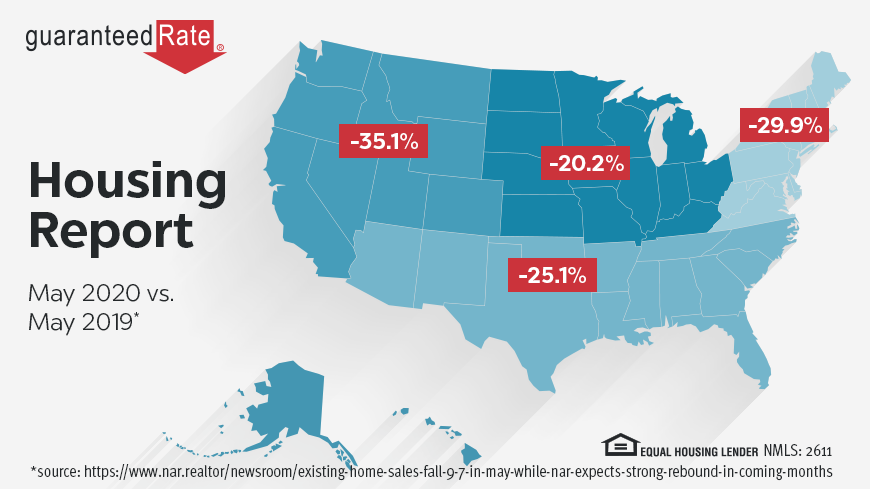 Marking a three-month decline due to the coronavirus, May’s existing home sales fell 9.7 percent to a seasonally-adjusted annual rate of 3.91 million—down 26.6 percent from last year.

“Sales completed in May reflect contract signing in March and April—during the strictest times of the pandemic lockdown and hence the cyclical low point,” explains NAR’s chief economist, Lawrence Yun. “Home sales will surely rise in the upcoming months with the economy reopening and could even surpass one-year-ago figures in the second half of the year.”

A call for construction to combat rising housing demand

Median existing-home prices were up 2.3 percent in May—increasing to $284,600 with prices up in every region—marking the 99th straight month of year-over-year gains. Total housing inventory amounted to 1.55 million units at the end of May—up 6.2 percent from April, but down 18.8 percent from last year.

“New home construction needs to robustly ramp up in order to meet rising housing demand,” says Yun. “Otherwise, home prices will rise too fast and hinder first-time buyers, even at a time of record-low mortgage rates.”

Properties typically remained on the market for 26 days in May—down from 27 days in April but equal to May of 2019.

A driving force in the country’s economic recovery

“Although the real estate industry faced some very challenging circumstances over the last several months, we’re seeing signs of improvement and growth, and I’m hopeful the worst is behind us,” says NAR President Vince Malta. “NAR, along with our partners and 1.4 million members, are already working to reignite America’s real estate industry, which will be a key driver in our nation’s economic recovery.

The move to the suburbs

A recent NAR report outlines the buying behaviors of millennials—analyzing current housing affordability and job market conditions during the pandemic and identifying the top 10 markets with opportunities for millennial homebuyers. These markets include:

Sales down across the regions

Both month-over-month and year-over-year sales decreased in all four major regions.