A record rebound for existing-home sales 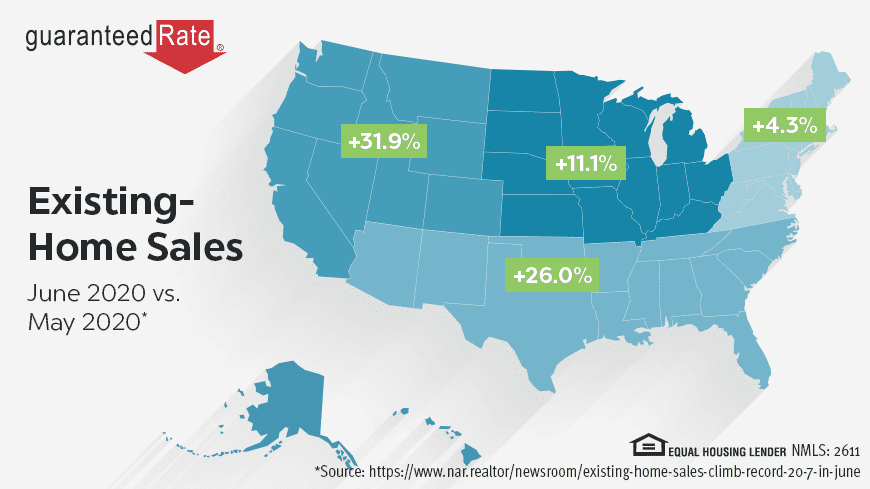 After three consecutive months of declines caused by the ongoing pandemic, existing-home sales increased 20.7 percent in June to a seasonally adjusted annual rate of 4.72 million, though year-over-year sales were still down 11.3 percent.

“The sales recovery is strong, as buyers were eager to purchase homes and properties that they had been eyeing during the shutdown,” explains NAR’s chief economist, Lawrence Yun. “This revitalization looks to be sustainable for many months ahead as long as mortgage rates remain low and job gains continue.”

The median existing-home price in June was $295,300—up 3.5 percent from last year—with home prices increasing in every region, marking the 100th straight month of year-over-year gains. And while total housing inventory was up 1.3 percent in June, it was still 18.2 percent lower than last year, further solidifying an already competitive market.

The domino effect of low inventory

Yun, who has continually voiced concerns over a growing lack of inventory, cautions about the potential for inflated costs. “Home prices rose during the lockdown and could rise even further due to heavy buyer competition and a significant shortage of supply.”

NAR’s recently released 2020 Member Profile emphasizes his concern, with Realtors® pointing to low inventory as one of the top hindrances for potential buyers.

Bouncing back for economic recovery

“It’s inspiring to see Realtors® absorb the shock and unprecedented challenges of the virus-induced shutdowns and bounce back in this manner,” said NAR President Vince Malta. “NAR and our 1.4 million members will continue to tirelessly work to facilitate our nation’s economic recovery as we all adjust to this new normal.”

“Homebuyers considering a move to the suburbs is a growing possibility after a decade of urban downtown revival,” says Yun. “Greater work-from-home options and flexibility will likely remain beyond the virus and any forthcoming vaccine.”

Growth across the regions

All four regions experienced month-over-month growth in sales, though year-to-year numbers were down across the board.