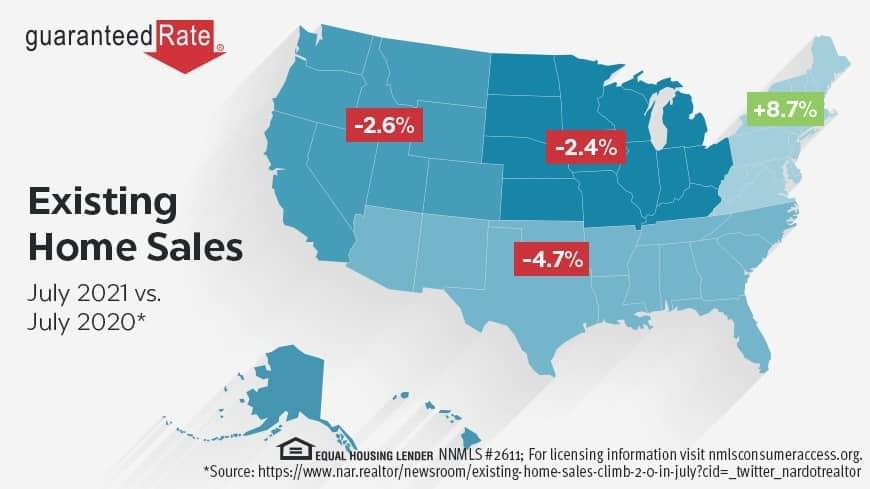 In a summer that has seen record temperatures from coast to coast, the July housing market has also refused to cool off as existing home sales rose for the second consecutive month. Compared to June, three out of four national regions displayed moderate growth while the fourth remained unchanged. Results were mixed on a year-over-year basis, but two key regions showed improved sales, while another remained the same as last year. Only one region declined on an annual basis (Midwest).

According to the National Association of Realtors (NAR), total existing home sales—a figure that includes single-family residences, co-ops, condominiums and townhomes— increased 2% from June to a seasonally adjusted rate of 5.99 million. Year-over-year, sales were up a modest 1.5%.

NAR’s chief economist Lawrence Yun shared his perspective on the market, highlighting once again the hot topic of available housing. “We see inventory beginning to tick up, which will lessen the intensity of multiple offers.” .

But what does that mean for the overall sector? “Much of the home sales growth is still occurring in the upper-end markets,” said Yun, “While the mid- to lower-tier areas aren't seeing as much growth because there are still too few starter homes available."

Indeed, housing supply remains at the center of the conversation. For the month ending July 31, total housing inventory stood at 1.32 million units, an increase of 7.3% from June but down 12% from a year ago. At the present pace of sales, unsold inventory sits at a 2.6-month supply, which is a slight improvement from the 2.5-month figure recorded in June. For a comparison, last year at this time unsold inventory sat at a little over three months.

Median home prices up once again

"Although we shouldn't expect to see home prices drop in the coming months, there is a chance that they will level off as inventory continues to gradually improve," said Yun.

Until that happens, of course, listings remain hot. For July, homes remained on the market for just 17 days on average, which - while unchanged from June - is down from 22 days in July 2020. To put it another way, 89% of homes sold in July were on the market for less than a month.

The tight market is also having an effect beyond sales. While Yun expects housing inventory to expand, he acknowledges that it’s having an outsized impact in the short term. "In the meantime, some prospective buyers who are priced out [of the housing market] are raising the demand for rental homes and thereby pushing up the rental rates," he added.

Three out of four regions saw monthly gains in July with only the Northeast remaining unchanged. When looking at housing sales on a year-over-year basis, results were mixed: The Northeast and South were up from last year but Midwest sales slightly declined and the West remained unchanged.

All four regions saw median home prices rise on an annual basis from July 2020. Across all housing types, the median existing-home sales price increased year-over-year by 17.8%—an impressive figure, although a slight retreat from the astronomical gains seen in June when compared to a year ago.