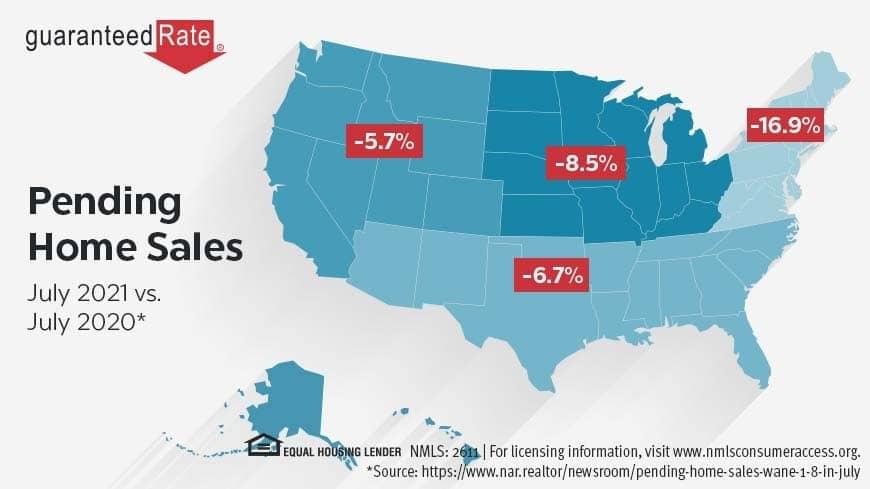 Echoing the downward trajectory of June’s performance, pending home sales retreated slightly in July. According to the National Association of Realtors (NAR), pending sales dipped 1.8% overall, with three out of four key national regions registering month-over-month declines. Only the West notched an increase in contract signings compared to June.

Furthermore, all four regions recorded lower pending home sales on a year-over-year basis. The aggregate reduction was 8.5%. The Northeast decreased the most with a 16.9% decline.

These numbers are based on the NAR’s Pending Home Sales Index, a forward-looking indicator of home sales based on contract signings. Pending sales typically lead existing sales by a month or two.

The frenzy is ending yet the shortage remains

According to NAR’s chief economist Lawrence Yun, “The market may be starting to cool slightly, but at the moment there is not enough supply to match the demand from would-be buyers." Yun’s assessment is certainly mixed news for homebuyers but there does appear to be some evidence of increased supply on the horizon. Said Yun, “Inventory is slowly increasing and home shoppers should begin to see more options in the coming months.”

One of the more enduring stories of 2021 has been the fierce competition for housing, resulting in a particularly high number of bids, many of which have been considerably above the asking price. Many potential buyers are wondering if these astronomical bids will continue to affect the sales process or if they’ve run their course? On this topic, Yun was more reassuring—but also pinpointed a new trend that would seem to accelerate the homebuying process—at a cost.

Some buyers are skipping appraisal and home inspections

“Homes listed for sale are still garnering great interest, but the multiple, frenzied offers— sometimes double-digit bids on one property—have dissipated in most regions," Yun said. "Even in a somewhat calmer market, a number of potential buyers are still choosing to waive appraisals and inspections."

According to NAR, 27% of homebuyers waived appraisal and inspection contingencies in July. While these evaluations are an important part of the process, they can take time. In competitive markets, many buyers are apparently choosing to forego them in hopes of speeding up the process. The inevitable question is: Will they regret their decision later?

Pending sales mostly down in July

As mentioned at the top, three out of four regions recorded less contract signings in July than in the previous month. The lone bright spot: The Western region, where a modest uptick in pending sales was recorded. Let’s take a look at the aggregate performance for July and also compared to 2020: