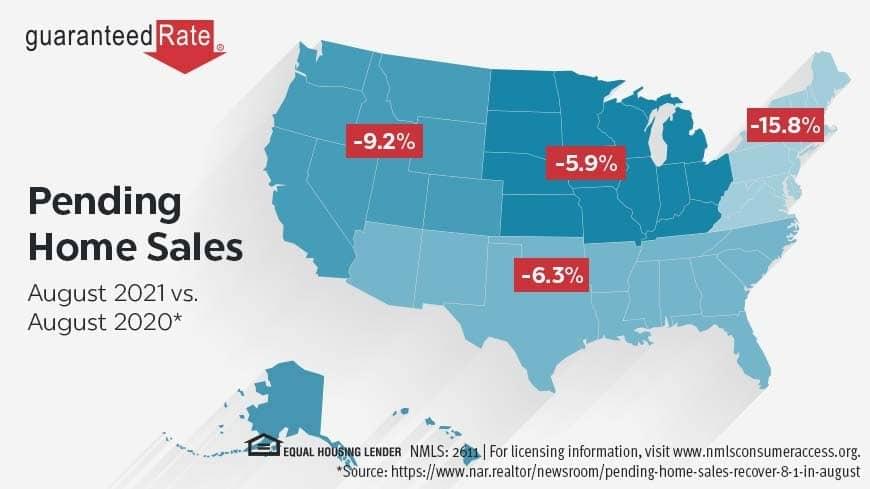 The waning days of summer provided a reversal of fortune for the housing market as pending sales surged in August when compared to July signings. The increase in contracts was evident in all four national regions, led by hot markets in the Midwest and South. However, on a year-over-year basis, the outlook was considerably less sunny: The Northeast, Midwest, South and West all produced fewer pending sales than at this point in 2020.

August 2021: A look at the Pending Home Sales Index

According to the National Association of Realtors (NAR), the Pending Home Sales Index—a forward-looking indicator of contract signings—increased by 8.1% overall in August to a level of 119.1. As we mentioned above, year-over-year signings were not as robust, dipping by 8.3% compared to last year. As a point of reference, an index of 100 is equal to the level of contract activity in 2001, which was the first year to be examined.

Given a chance to weigh in, NAR’s chief economist Lawrence Yun said, “Rising inventory and moderating price conditions are bringing buyers back to the market. Affordability, however, remains challenging as home price gains are roughly three times wage growth.”

Understandably, this disparity has real long-term implications for the housing market as well as the future of work.

Said Yun, “The more moderately priced regions of the South and Midwest are experiencing stronger signing of contracts to buy, which is not surprising. This can be attributed to some employees who have the flexibility to work from anywhere, as they choose to reside in more affordable places."

Not all areas are experiencing a downturn from August 2020. Housing data from realtor.com has pinpointed several metro areas that have earned the distinction of “hottest housing markets” when compared to this time last year. Based on market demand and “pace of market” as defined by number of days a listing remains active, the top five metro regions were:

Overall, pending home sales showed a marked improvement from the sluggish performances seen in both June and July, as all four national regions registered a robust uptick in contract signings.

However, there are reasons to temper emerging enthusiasm. Market conditions are unbalanced and new home prices remain out of reach for many individuals. When compared to August 2020, pending sales fell 8.3%.

The regional breakdown is as follows: