Housing rebound: Sales up 7% on a monthly basis but compared to last year 3 out of 4 regions decline 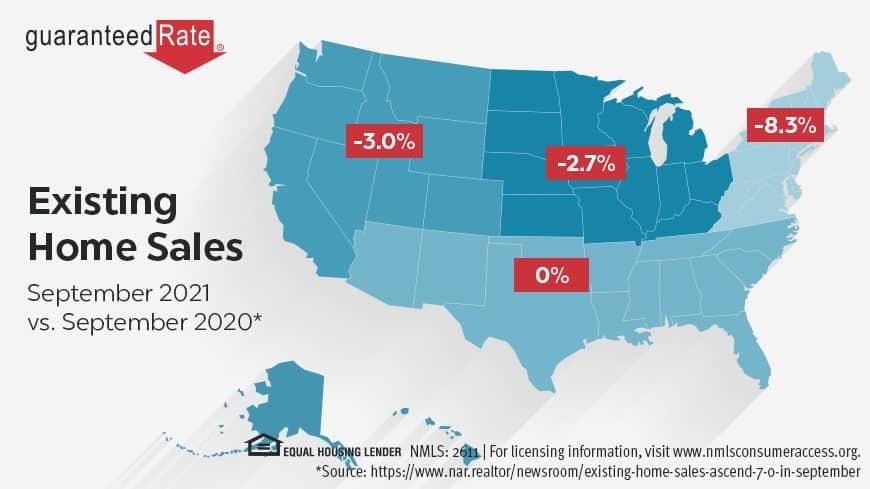 The market loves a turnaround.

After declining in August, existing home sales rebounded in September and showed surprising strength on a month-over-month basis. According to the National Association of Realtors (NAR), all four national regions demonstrated growth when compared to the previous month; however, on an annual basis, the picture was decidedly more sluggish: Three out of four regions declined while the South reported sales that were unchanged from a year ago.

Total existing home sales—a figure that includes single-family homes, townhomes, condominiums and co-ops—climbed 7% in September to a seasonally adjusted, annualized rate of 6.29 million. While these monthly figures come as welcome news to the housing sector, sales lagged when compared to those from September 2020, falling 2.3%.

Statistically speaking, housing supply continued to dwindle. Total inventory was down 13% from a year ago to 1.27 million units—a figure that is equivalent to 2.4 months of the monthly sales pace. September inventory also recorded a monthly decline of 0.8% from August.

That said, NAR chief economist Lawrence Yun made the following observation, adding some color to the supply-and-demand issue: “Some improvement in supply during prior months helped nudge up sales in September. Housing demand remains strong as buyers likely want to secure a home before mortgage rates increase even further next year."

There is one year-over-year figure that continues to show resilience: median home prices. September’s median existing-home price (for all housing types) was reported as $352,800—a 13.3% uptick from September 2020. This was fueled by price increases within each major region of the country. If you’re counting at home, this marks the 115th straight month of year-over-year gains.

Where this is all going

There have been predictions for months that the nation's housing inventory would begin to pick up. There have been ebbs and flows, but the picture remains unclear, even if there are some reasons to remain positive.

“As mortgage forbearance programs end, and as homebuilders ramp up production—despite the supply-chain material issues—we are likely to see more homes on the market as soon as 2022," said Yun.

And hopefully that means more properties available for first-time homebuyers—a group that accounted for just 28% of sales in September (down from 29% in August and a drop of 3% from a year ago).

Added Yun, “First-time buyers are hit particularly hard by the historically high home prices as they largely do not have the savings required to buy a home or equity to offset such a purchase."

Condo sales, while rising, did not see the same level of gains. Existing condo/co-op sales were up 1.4% from August to a seasonally adjusted annual rate of 700,000 units. On a year-over-year basis, the median existing condo price was $297,900 in September, an annual increase of 9.3%.

On a seasonally adjusted annual rate, existing home sales rose 7% from August to September. All four national regions experienced an increase in home sales on a monthly basis, while three out of four regions dipped on a YOY basis, with only the South remaining steady.