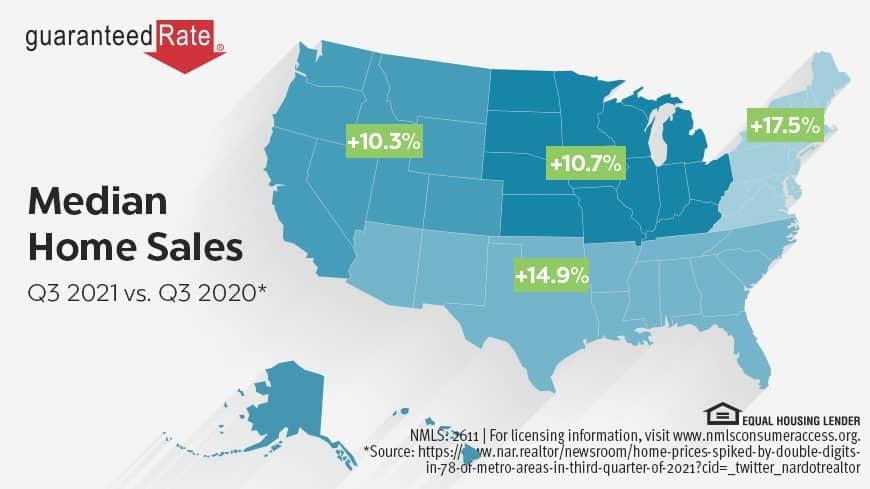 According to the National Association of RealtorsⓇ (NAR) third-quarter report, the prevailing pattern of supply and demand continues to dominate the housing market: Robust consumer desire combined with low inventory exerted upward pressure on home sale prices throughout the U.S. The result? Median home prices grew 16% on an annual basis.

All regions participate in the upward surge

Digging into the numbers just a bit, it’s evident that these pricing trends are reflected in a wide swath of markets and regions. Median sales prices rose for existing single-family homes in all but one of the 183 measured markets in Q3 2021. Additionally, 78% of those markets experienced double-digit growth increases.

Nationally, the median sales price of single-family existing homes rose to $363,700. That’s an increase of $50,300 from this time last year.

“Home prices are continuing to move upward,” said Lawrence Yun, NAR chief economist, “but the rate at which they ascended slowed in the third quarter.”

To that point, on a quarterly basis, median home sale prices grew measurably more slowly in Q3 than they did during Q2, where they climbed by 22.9% when compared to the same quarter in 2020. This is a trend that is likely to continue.

“I expect more homes to hit the market as early as next year,” continued Yun, “and that additional inventory, combined with higher mortgage rates, should markedly reduce the speed of price increases."

The top five metro areas in terms of year-over-year gains in median home sale prices were the following:

The most expensive metro markets could be found on the West Coast. The top three were all in California:

As has been discussed widely in the media, homebuying competition remained fierce, especially in top markets.

"While buyer bidding wars lessened in the third quarter compared to early 2021, consumers still faced stiff competition for homes located in the top ten markets," said Yun. "Most properties were only on the market for a few days before being listed as under contract."

The effect on mortgage payments

Unfortunately, there is another side to the skyrocketing home prices—affordability.

Among all homebuyers, monthly mortgage payment as a portion of median family income increased to 16.6%—it came in at 14.9% one year ago. A mortgage is considered affordable if the payment amounts to no more than 25% of the family's income

“For the third quarter —and for 2021 as a whole—home affordability declined for many potential buyers," said Yun. "While the higher prices made it extremely difficult for typical families to afford a home, in some cases the historically-low mortgage rates helped offset the asking price."