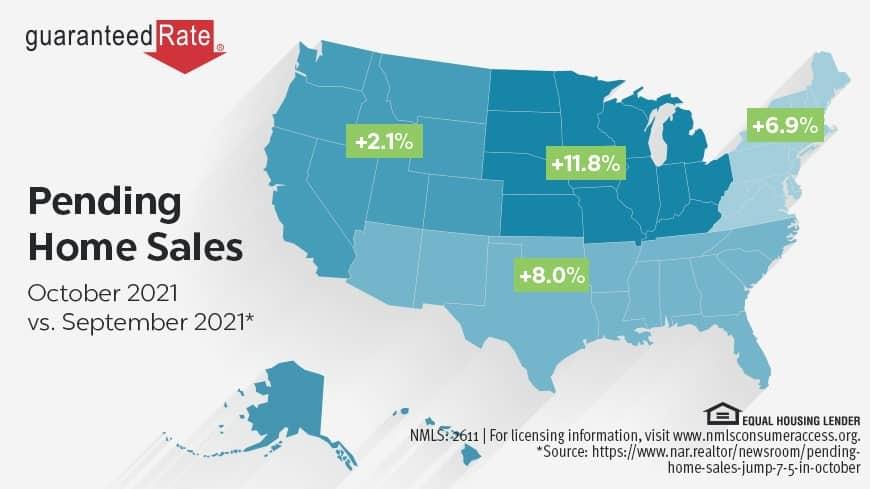 Contract activity for home sales were up an impressive 7.5% in October, in sharp contrast to the negative numbers we observed in September. Pending home sales increased in all four regions of the country compared to the month prior, though it’s a different story when comparing numbers to a year ago. Compared to 2020, two regions posted gains while the other two were down.

"Motivated by fast-rising rents and the anticipated increase in mortgage rates, consumers that are on strong financial footing are signing contracts to purchase a home sooner rather than later," said Lawrence Yun, chief economist at the National Association of Realtors®.

"This solid buying is a testament to demand still being relatively high, as it is occurring during a time when inventory is still markedly low.”

Hottest activity in the South

Contract activity was the hottest in the parts of the country where the temperature is still relatively warm. The South region saw big gains in month-over-month activity, with 8.0% gains from September. This was second only to the Midwest, and was also an improvement of 0.6% from October of last year.

In addition, the most improved large metro areas on Realtor.com®'s Hottest Housing Markets from last year to now are all in the south:

These gains in the South helped push increases nationwide, ensuring that this will be an historic year for home sales. Yun notes, "the notable gain in October assures that total existing-home sales in 2021 will exceed 6 million, which will shape up to be the best performance in 15 years."

While all four regions saw gains from September, year-over-year numbers were slightly less positive. The Northeast and the West saw declines from their activity in October 2020.