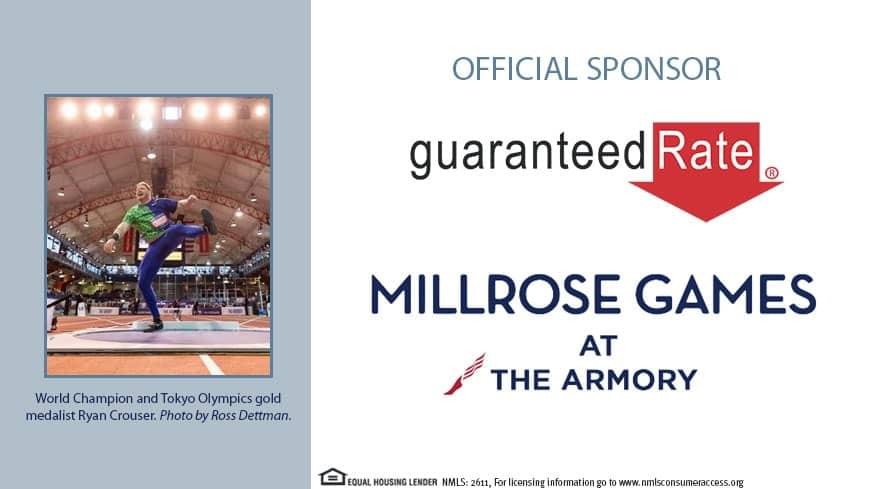 CHICAGO (January 27, 2022) – Guaranteed Rate, a leader in mortgage lending and digital financial services, announces today that it has become an official sponsor of the 114th Millrose Games, the world's longest-running and most prestigious indoor track and field competition, hosted by the Armory Foundation.

“The Millrose Games is proud to partner with Guaranteed Rate, one of the nation's largest financial service providers and supporter of numerous major sporting events,” said Armory Foundation Co-President Jonathan Schindel. “Track and field athletes at Millrose are considered to be among the world's greatest athletes and are extremely deserving of the support of Guaranteed Rate and the other sponsors of the Millrose Games.”

“Guaranteed Rate is proud to sponsor the Millrose Games, an iconic sporting event that features some of the absolute best track and field athletes,” said Guaranteed Rate Vice President of Sports Marketing and Partnerships Steve McNelley. “This partnership reflects our company’s core value of working with the ‘best of the best.’”

“I am excited to return to the Millrose Games to showcase one of Team USA’s strongest events,” said Ryan Crouser, who captured the gold medal in the shot put during last summer’s Tokyo Olympics and is making his third Millrose Games appearance. “It’s an honor to compete in one of the premier indoor meetings at such a historic venue.”

Athletes confirmed for the 114th Millrose Games include:

Tickets for the 114th Millrose Games can be purchased by visiting https://www.millrosegames.org/get-tickets.

About The Armory Foundation

The Armory Foundation is a New York City non-profit institution, with the mission of "Keeping Kids on Track." Each season The Armory – the proud home of the Millrose Games – hosts more than 100 track & field meets and welcomes more than 220,000 visits. Among its many youth sports and educational programs, including the acclaimed Armory College Prep program, The Armory runs the leading collegiate indoor track meets with the Dr. Sander Invitational Columbia Challenge and the HBCU Showcase, and hosts the largest high school indoor track meets with the U. S. Air Force Hispanic Games, The New Balance Games, New Balance Nationals Indoor, the Energice Coaches Hall of Fame Invitational and Marine Corps Holiday Classic. New York Road Runners is a proud sponsor of all athletic events at The Armory. The Armory runs the Columbia & NewYork – Presbyterian Indoor Marathon Team Relay presented by New York Road Runners, which is the world’s largest indoor marathon relay. The Armory is also the home to the National Track & Field Hall of Fame and dozens of very large education-focused events. For more: Please visit Armory.NYC and ArmoryTrack.com.