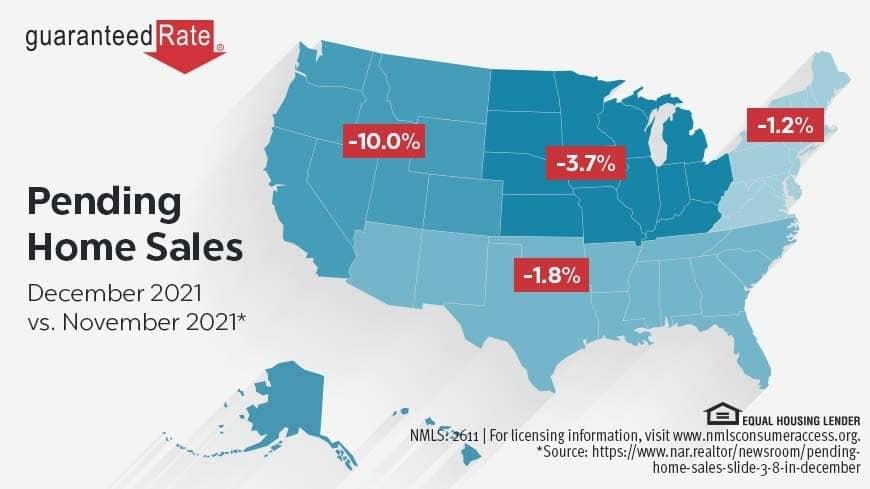 The end of the year saw another month of declining pending home sales. All four U.S. regions felt the decline, according to the National Association of Realtors® (NAR), as concerns regarding low housing inventory, rising home prices and rising mortgage rates that we’ve recognized for much of 2021 continues into 2022.

The Pending Home Sales Index, an indicator of future home sales based on contract signings, dropped 3.8% to 117.7 in December. Year-over-year pending home sales activity fell as well, as transactions were down 6.9% from December 2020. An index of 100 is representative of the level of contract activity in 2001.

For most of 2021, COVID-19 hesitancy, low housing inventory and rising home prices dominated the market. The delta variant alone played the largest role last year as it slowed down construction and homebuying activity throughout the year. The omicron variant finally appeared in nationwide housing activity by November coinciding with the typical seasonal homebuying slowdown. This meant the market was already going to face considerable challenges going into January. While the variant will continue, many are optimistic this latest wave of the virus will end soon and bring more buyers back into the fold.

As vaccine rollouts continue and COVID-19 transmission numbers decline, the resulting return to normal for the economy has also brought about the gradual rise in mortgage rates. As Yun stated above, this will likely push away some buyers. However, the market saw plenty of positives going into the new year. December marked a third straight month of increased home construction despite housing inventory hitting an all-time low. Yun believes last year was great for sales and price appreciation.

As he looks ahead to this year, Yun sees a lot of gradual change on the horizon, "The market will likely endure a minor reduction in sales as mortgage rates continue to edge higher." He added, "The combination of a more measured demand and rising supply will bring housing prices better in line with wage growth."

Existing-home sales are expected to fall by 2.8% this year and home prices could rise by 5.1%.

Activity is down once again

All four regions saw decreases from November, and year-over-year numbers were down as well.