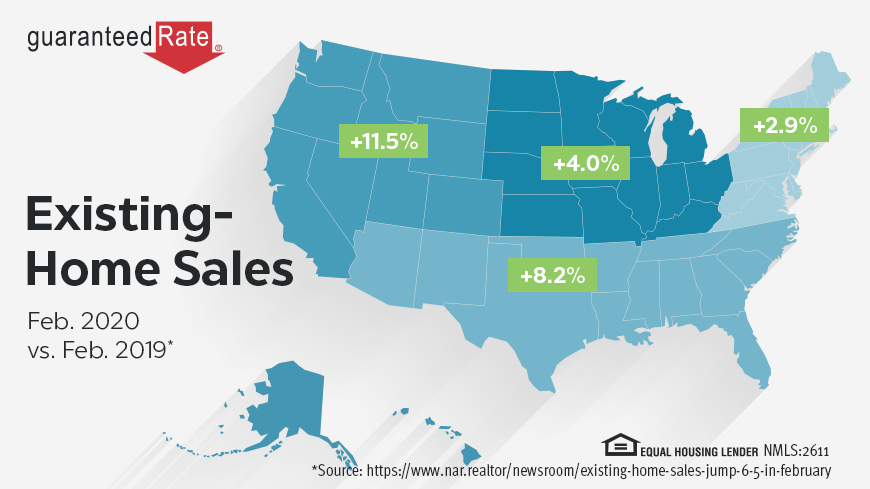 While the industry braces for the economic hit the coronavirus could bring, last month’s numbers were promising. After a slight decline in January, February existing-home sales increased 6.5 percent to a seasonally adjusted annual rate of 5.77 million. Year-over-year sales increased for the eighth month in a row—up 7.2 percent from last year.

“February’s sales of over 5 million homes were the strongest since February 2007,” says NAR’s chief economist, Lawrence Yun. “I would attribute that to the incredibly low mortgage rates and the steady release of a sizable pent-up housing demand that was built over recent years.”

Preparing for the effects of a global pandemic

“These figures show that housing was on a positive trajectory, but the coronavirus has undoubtedly slowed buyer traffic and it is difficult to predict what short-term effects the pandemic will have on future sales,” Yun explains.

“For the past couple of months, we have seen the number of buyers grow as more people enter the market,” says Yun. “Once the social-distancing and quarantine measures are relaxed, we should see this temporary pause evaporate, and will have potential buyers return with the same enthusiasm.”

No one knows quite what to expect with the current global emergency, but Yun remains hopeful that home prices will hold. “Unlike the stock market, home prices are not expected to drop because of the on-going housing shortage and due to homes getting delisted during this time of crisis,” Yun explains.

NAR President Vince Malta comments on the industry’s plan to combat the economic struggle the country faces. “In the midst of this national emergency, NAR has been and will continue to be in contact with Congressional leaders and White House officials as they consider various policies to ease the economic impact of the coronavirus,” he explains. “NAR is engaged in these discussions and presenting proposals that will support real estate and the people that make up the industry.”

Malta notes the adaptability he’s witnessed already. “It is truly inspiring to see so many of our fellow Realtors® and brokerages adjust on the fly,” he says. “Agents nationwide are keeping interest alive with innovative technologies, holding virtual open houses and computer-generated tours.”