7 ways that the pandemic changed housing 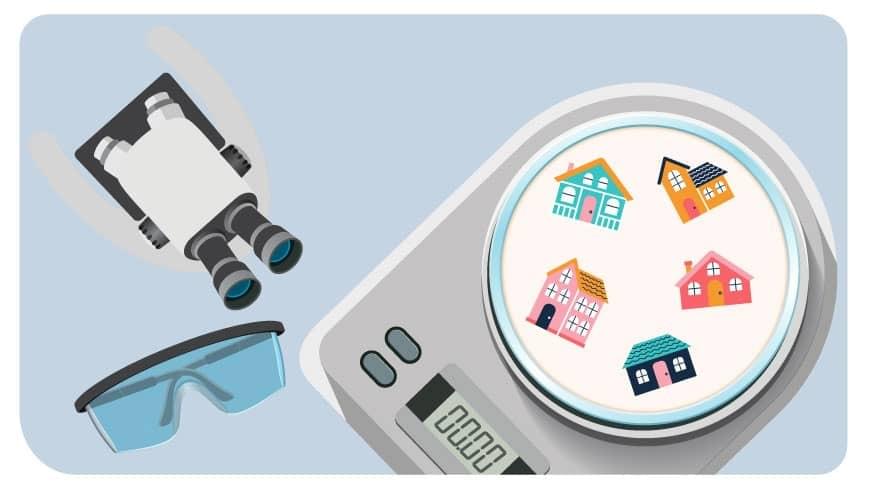 When we look at factors that affect the housing market, there are the usual suspects, of course: the economy, interest rates, housing inventory, regional market trends, and so many more. The COVID-19 pandemic of 2020–2022, however, took those normal factors, turned them all on their ears, and largely redefined the housing market as we know it.

As we take a look back at this industry-defining era, we thought we would discuss seven ways that the pandemic shaped the houses we buy and the economic factors we consider when we buy them. Let's dive right in.

Perhaps the most immediate effect of the pandemic, especially during the initial lockdown, was that many people began working from home if their jobs allowed it. This meant two things: First, that a home's digital infrastructure for hosting video meetings, transferring files and all sorts of other work-related activities became a priority in both homes that workers were already in, as well as a must-have for the homes that they considered buying during this time.

Second, homeowners needed more space — potentially a lot of it. A married couple might both need dedicated office space if they didn't have it already. If they had any children, who might suddenly be going to school online, they each needed a separate space for learning. A house that might normally be suitable for a working family suddenly became crowded as all members of the household had to work, live and play in the same space.

This burning need for more space informs several items on this list, but it wasn't just working remotely that drove it. Not being able to go out created a cascade effect for other places as well. Suddenly, the home might have to pull double to triple duty as a gym, a home theater or recreational space in addition to an office. Potentially any place that required external interaction needed to find some sort of analogue in the home — with increasingly smaller spaces to accommodate them.

With the physical location of a job becoming untethered from the job itself, homebuyers had to worry less about commute times and access to major highways. It became possible to live in another town, even another state or country, and still be able to clock in at the regular time.

Suburbs were originally designed to give the workforce in the nearby city a place to launch from away from the clutter and traffic of the city itself. Without that connection, the housing market opened up to more remote or rural locales, provided again that the online infrastructure was sufficient for their needs.

Some workers even opted for a "technomad" approach of equipping an RV or similar travel trailer with everything they needed to access work and keep mobile. Ultimately, the ability to work from home opened up incredible new possibilities and options for those looking for homes. What had been unthinkable only a year earlier was not only possible but preferred. A home's location was still vitally important, of course, but now it was for much different reasons.

It's often said of celebrities that they maintain lavish homesteads in order to show off their wealth and influence, but there is, perhaps, a more practical reason for this. Big celebrities can't just go to the movies, the park, or other public spaces without drawing attention. So, they have to incorporate all the places they might want to go into their home.

During the pandemic, many homeowners felt this sting as well, though perhaps without the fame and fortune. Cut off from going out to places, the emphasis on finding new and better ways to utilize space became much more important — both inside and outside the home. Homes that made excellent use of their internal spaces became instantly more attractive on the market.

The same was true for the outdoor living spaces. Demand for bigger back yards, pools, privacy fences, patios and decks grew almost overnight. Whether it was people with pets, or just those who needed a place to unwind outside, everyone needs their little slice of privacy, in whatever form that takes. More and more, homebuyers had to find it somewhere in the home, which meant that internal and external spaces might wind up being a make-or-break feature for potential buyers.

One of the most lasting effects from the pandemic that we're still feeling today is how heavily the market favors the seller. Housing inventory since the housing crash of 2008 has never quite caught up with demand, though some regional markets have fared better with this than others.

When you couple the intense need for new space with low mortgage rates to stimulate buying, it became a potent one-two punch that consolidated most of the power of the market into the hands of sellers. Demand for houses skyrocketed, but supply still lagged way behind. A homeowner intent on selling their home likely found that they were sitting on a goldmine, often in spite of the condition of the home in question.

Since buyers faced extreme competition, this led to overpaying, fierce bidding wars and buyers having to make serious concessions to have their offer taken seriously. This was, of course, a fantastic opportunity for sellers. For first-time homebuyers, though? Not so much. While the market now shows some signs of pumping the brakes on some of these factors, it's still very much a seller's market out there right now, and will likely remain so for the foreseeable future.

Thankfully, Guaranteed Rate has ways for buyers to stay competitive with their offers, such as FastTrack and PowerBid Approval. FastTrack is a way to get you to the closing table and clear to close with blazing speed. PowerBid allows your offer to compete with cash offers, so you can bid, buy and close fast.

One of the ways that homebuyers tried to cope with the frustrating conditions of the sellers’ market was to look into new home construction. The solution was simple: If all of the existing homes are spoken for, build new ones. Simple, right?

Yes and no. Going the home construction route definitely made sure that there wasn't an existing owner holding the purse strings. It also had the added bonus of being customizable, so that the buyer could tailor the space to their family's needs. New home construction proved to be very popular during the pandemic. By December of 2021, 34.1% of all homes sales in the US were new home construction.

Unfortunately, building a home had to contend with other conditions the pandemic brought about: materials and labor shortages. The cost of lumber, in particular, rose in price. By its very nature, the public health crisis made it where fewer work crews could come together on new construction projects. This limited the scope of what could be accomplished in a safe and effective way.

Pre-pandemic, a new build might take around four months. During the pandemic that timeframe stretched to six months to a full calendar year. Homebuyers had to contend with the fact that their dream home might be within reach, but that they would have to wait longer than normal in order to cross that particular finish line.

Once again, Guaranteed Rate is here for buyers to help take the guesswork and stress out of housing, particularly new home construction. With our Lock ‘n’ Build program, you can protect your current rate for up to twelve months while your house is being built. If rates go up, you keep the rate you’ve locked in. If they go down, however, you may have the option to lower your rate. It’s a win-win situation.

This ties into the seller's market as noted above but is deserving of its own entry. It's hard to understate the effect of housing prices reaching incredible highs. Once again, the law of supply and demand helped propel this forward. Houses became a limited commodity on the market, with so many people trying their best to secure one.

Bidding wars took the list prices even higher as potential buyers offered more and more to edge out their competitors. Houses might sell for twice or three times as much as they would have just five years prior, depending on the market.

This also had the effect of pricing some buyers out of the market completely, particularly first-time homebuyers who might not possess the capital or equity built up elsewhere to afford the record home prices. While home prices have started to cool off in recent months, they are still much higher than they were before the pandemic. It's still something that buyers must contend with for the time being. It's not all bad news, however, which brings us to our next point.

On the other side of the coin, higher home prices pushed home equity to new highs as well, especially for the tenured homeowners who had built up significant amounts of equity in their homes already. Even relatively new homeowners, however, saw their margin of equity jump up to new heights.

This new-found equity became fertile soil for all sorts of ways to leverage their new level of financial might, including home equity loans and home-equity lines of credit (HELOC). This, in turn, opened the door for homeowners to consider debt consolidation, renovations, college tuition payments or any number of high-dollar endeavors that might normally be out of reach.

Though housing prices, and thus home equities, have started to come down a little, it will be a long time before homeowners have to worry about any great erosion to their equity — their window of opportunity to put that equity to good use shows no signs of closing anytime soon.

With higher interest rates and other economic factors, the prevailing winds of the housing market have started to shift from what they were almost two years ago, but the stamp the pandemic left on the industry is one that's not likely to entirely go away.

Each time there is a major development in the housing market, it builds up its own kind of inertia that may fade over time, but its effects can still be felt. It's true of the 2008 housing crisis, and it's certainly true of what we saw during the pandemic.

All of the points we highlighted on our list still play a part in the housing market as we know it today — whether it's the features that homebuyers look for in the pursuit of a home, or the extra freedom that existing homeowners have to work with now, the incredible changes that we witnessed during the pandemic changed homes and housing for this year, and for many more to come.