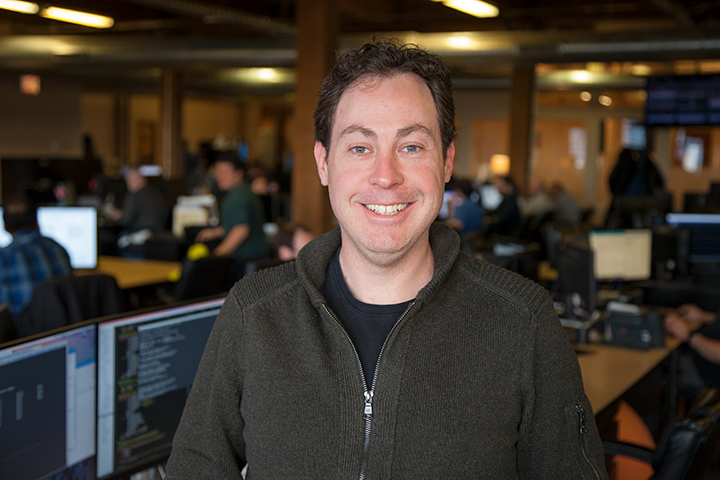 Armed with a computer science degree from the University at Albany-SUNY, Jeffrey Sherman began his professional career with electronic-trading firm Island ECN in 2000 as a junior developer. It’s an experience he recalls fondly, particularly because of the significant amount of change his company helped affect.

“Island ECN was instrumental in pushing fractions to decimals in the stock trading world and they also opened the floodgates to high frequency trading,” explains Sherman. “Part of what made being there so exciting was the emphasis on the mission. They wanted to make a ton of money, but they were also very intent on helping the consumer and providing a better experience.”

Several jobs later, Sherman joined Guaranteed Rate in early 2015 as a senior software engineer, a role with the equivalency of principal in many other companies. Much like with Island ECN, he anticipates an opportunity to be part of an evolution that impacts the masses.

Endless amounts of paper that were previously scanned or uploaded and eventually shredded are becoming a thing of the past. Now, tech savvy (and environmentally friendly) borrowers can save time by uploading such documents directly using Guaranteed Rate’s Digital Mortgage. The tool is the first of its kind, allowing borrows to input their information on their own and at any time, rather than speaking to a loan officer over the phone to do so.

Sherman’s team is currently working on allowing borrowers to self-navigate to the underwriting stage of the process in a single session, as well as workflow automation and data validation elements.

“These things will dramatically speed up the loan process,” explains Sherman. “I hope to look back five years from now and see that Americans are paying tens of millions of dollars a year less in interest in part because of the work I did.”

Sherman is a member of one of Guaranteed Rate’s engineering teams that supports approximately 20 third-party vendors and other microservices the company utilizes. He has focused on data mining Guaranteed Rate’s past loans to identify customers who can save money by refinancing. This effort has helped borrowers refinance over $3 billion in debt in 2016 thanks to lower interest rates.

Recently, Sherman has shifted his attention to cycle time reduction efforts. As he explains, lessening the amount of time between the Real Estate Settlement Procedures Act (RESPA) application date and arriving at clear to close is beneficial for both Guaranteed Rate and the consumer.

“If we speed up the process, it helps us become more efficient and profitable, as we’ll be doing more work with the same amount of people,” notes Sherman. “It also allows us to shorten the lock period. At the end of the day, we’re committed to making things better for our customers.”

It’s an approach which has set apart Guaranteed Rate as the industry technology leader.

“We as software engineers have a wide latitude of discretion in terms of where we focus and how we want to build,” says Sherman. “If we see something that we know we can build, we ask ourselves if it will help the client. If so, we get the freedom to move forward.”

As Sherman notes, it helps to be surrounded by several highly capable teammates.

“There’s a laborious hiring process at Guaranteed Rate which keeps the bar very high,” explains Sherman, who embraces mentoring his younger colleagues. “It’s been said teachers love to have smart students because it makes the job so much more enjoyable. I explain how I see things and they get it, rather than telling them to do something because I said so. I also encourage them to let me know if they see a different way to approach an issue.”

It’s that kind of collaboration which Sherman believes is necessary to achieve some of his group’s lofty goals.

“I’m a pretty good programmer and I can crank out a good amount of code,” Sherman acknowledges, “but I can’t do it all on my own and no one can. You’re going to succeed that much more by making sure everyone else succeeds.”